Popular Nigerian singer Simi has advised her fans to start their new year resolution now if they have any instead of waiting for the traditional January 1st.

According to the singer, this is so because January 1st does not have any magic.

Read Also: “You Keep Ignoring Me, There’s Only So Much I Can Take In This Relationship” – Simi Tells Adekunle Gold

She made this known via her official Twitter handle on Saturday, 28th December. Do you agree with her???

If you ‘ve got any new year’s resolution, start today. January 1 doesn’t have any magic. 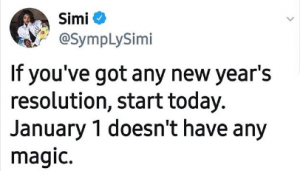