He became a major discussion after fans complained that it was wrong for the organizers of the event to make him sit on a plastic chair under a canopy while waiting to mount the stage.

More drama ensued after the singer mounted the stage and he was mobbed by his fans.

Read Also: After Announcing Plans To Get Married In 2020, Wizkid Reveals Plan For His Baby Mamas

Taking to his In Instagram story after the show, the singer shared the unbelievable state of his shoes which were visibly looking dirty due to how he was stamped on by fans. 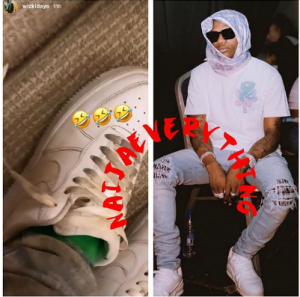