Home Entertainment Wizkid Will Be The End Of Me: Young Lady Reveals After Seeing...
Facebook
Twitter
WhatsApp

The extent to which some people have become star-struck is immeasurable and such is the case of a Twitter user identified as @Feyisayomi.

The young lady, shortly after seeing popular Nigerian singer, Ayodeji Balogun popularly known as Wizkid declared that the singer would be the end of her.

She added that the singer is such a beautiful piece to behold.

While it remains unknown if the singer even knows that she exists, below is what she wrote on her Twitter handle.

I saw wizkidayo yesterday, that man will be the end of me. Such a beautiful peice. 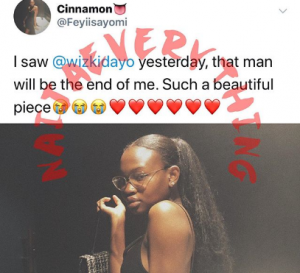