Home Entertainment “Your Mother Did Not Teach You”- Tboss Slams Follower Who Complained About...
Facebook
Twitter
WhatsApp

Former Big Brother Nigeria housemate, TBoss, has queried a fan if her mother really teaches her.

The fan in her comment said the reality TV star was dressed like 18 years old in the photo she uploaded.

Read Also: Na Belle Dem Nack You: Fans Disagree With TBoss For Saying She Spoke Her Baby Into Existence

TBoss in her response also stated that it isn’t her fault she looks 18 when she is in reality double the age of 18. 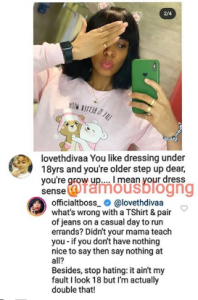