Trouble started after Olamide said the fact that the singer follows him on Twitter does not mean that he can not argue with him.

Read Also: “You Keep Ignoring Me, There’s Only So Much I Can Take In This Relationship” – Simi Tells Adekunle Gold

Replying to the tweet, Adekunle gold said he has unfollowed him so that he can argue more now. Do you think the singer went too far?

See screenshot of their exchange below; 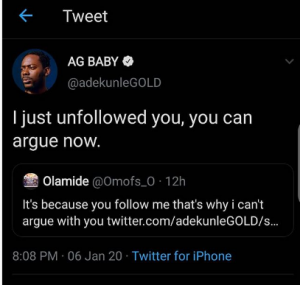