A Twitter doctor has shared his thoughts on African parents and, according to him, many of them never genuinely help their kids.

According to Dr Max, African parents only help their kids so they can brag to the world about doing this.

Read Also: African Parents Are The Worst, They Ruined Our Lives – Toke Makinwa

”The truth about African parents generally is: Hardly any help given by them is genuine and completely selfless. In most cases, they are laden with all sorts of unspoken expectations. They “sacrifice” a lot for the children in the hope that sometime in future, the will be able…

“To sit back at and “reap the fruits of their labour” via their children, a cliche forged and polished in the most ruthless selfishness and lack of consideration while cloaked in the most exquisite garments of “family togetherness”. Deep down, they hope to cash in on their investment, to show the world their report sheet of excellence in the success of their children while strutting about like peacocks in a chicken yard. At first, the children don’t see through all these, but then they grow up, mature through their experiences and begin to question some values and their upbringing. They are filled with confusion and uncertainty.

“Things begin not to add up. Any one of them who dares to raise even a concern over the run of affairs over the years is tagged a rebel, rude, unappreciative…A BLACK SHEEP…

“They try to find their way out but they find that it isn’t so easy to extricate themselves as they had already emersed themselves in this same prison of a family bond, the rules of which they had followed as children and adolescents without question….OUT OF TRUST…

“They want to do EVERYTHING for their children in the name of love for them, hampering their personal progress in the process, for no mechanic becomes proficient at his work without staining his hands with grease and sustaining injuries, no matter how mild. The indolent children however enjoy this poison cos it massages their love for ease, till their parents are no more and they suddenly face the harsh reality of life and find that they can’t do a thing for themselves.

“They frittered away their time enjoying all the parents did for them when they were supposed to be out there standing on their feet. Unfortunately, the few who are strong enough to break away from this “family bond” suffer immensely in the morning, become strong in the evening, only to repeat the cycle with their own children cos what their parents handed down to them, unknowing to them, formed their subconscious. The cycle is then repeated again and again……a vicious cycle in many cases! Where are those conscious enough to break this for good? Just a frank rant!” 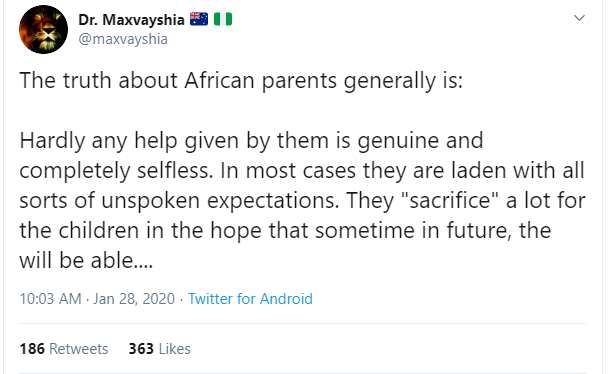 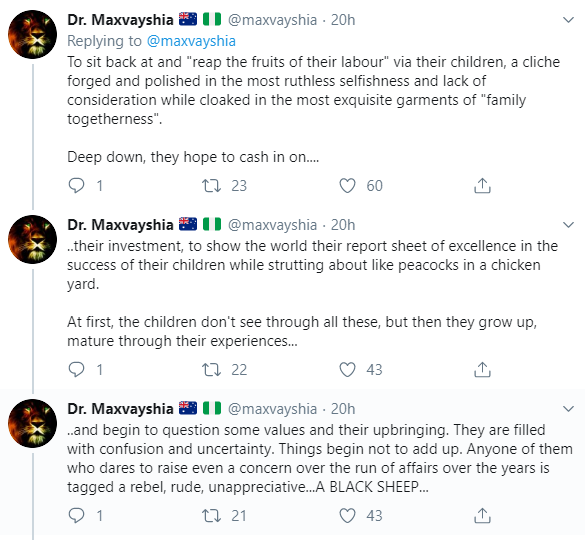 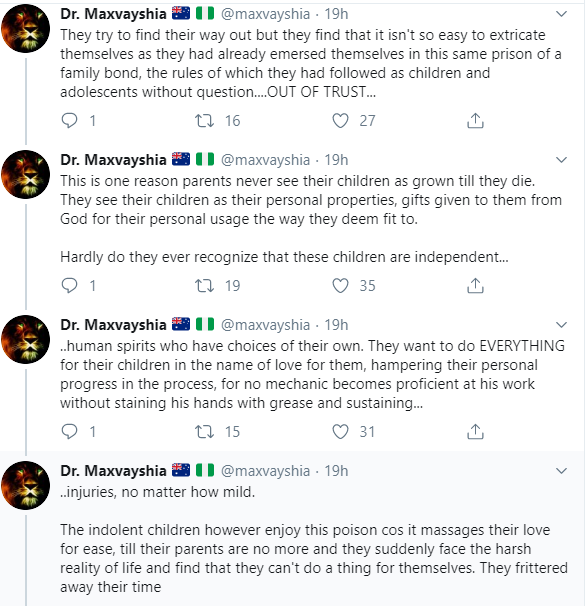 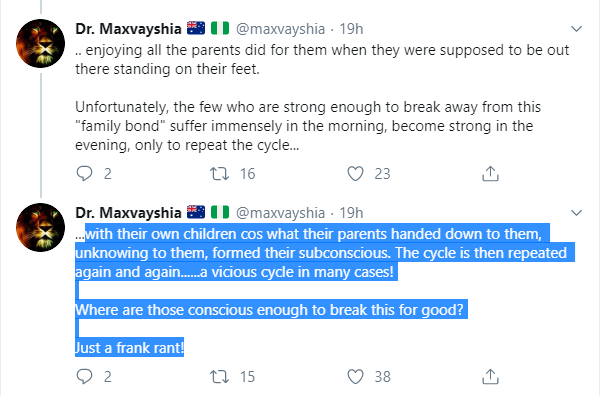 Who else agrees with the doctor? 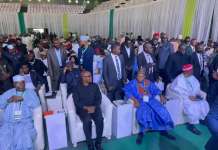