News surfaced a few days ago that the EFCC arrested a certain young man known as Mark Obisesan for fraud.

Read Also: I Have Never Fought Against Pastors: Daddy Freeze

A Ferrari 488 car, two iPhones, one Samsung phone, a laptop and ATM cards were also seized from the suspect who served a 12-month jail term for Internet fraud in the United Kingdom.

Reacting to the address, Daddy Freeze took to his IG to recount his experience visiting the suspect in EFCC detention.

”My visit to the EFCC office to see Mark Obisesan.
–
There are two sides to every story. If there was a lesson that 2019 taught me, this was it!
–
I also learnt that no matter how substantial an allegation is; or may seem to be, the onus of judgment lies in the hands of the justice system, not in the pedantry retailing of disjointed half facts via social media pages, that ofttimes only end up fanning the embers of emotional and sentimental perceptions, which are devoid of substance, yet end up not only defining; but becoming reality.
–
Armed with this knowledge, I decided to look into the case of this friend of mine who is from Ibadan, my neck of the woods. We Ibadan boys have a funny way of looking out for each other. I would have done the same for @shinapeller @akinalabi @skukipeeshaun @khaz_customs or anyone else from that ancient city I owe my upbringing to.
–
When I saw the story on the blogs circa 11 pm on the night of the 1st of January, I immediately started putting calls through. What’s going on? What happened to Mark? Finally after spending a few hours on the phone I was able to get his whereabouts and decided to drive over with @khaz_customs 2 days later.
–
Oh yes I was apprehensive; the Nigerian police force which we paint in no flattering colors made me cringe at the very idea of a visit to such a place.
–
However, I was more than pleasantly surprised at the politeness of the officers from the gate to the reception (we went to 2 EFCC offices before we located Mark), not one single officer asked for a bribe or used his firearm in an intimidating manner.
–
Mark was in high spirits sighting us and we assured him of our faith in the courts to dispense justice.
–
My appeal to Nigerians is: Let us apply the speed bump of caution as we race towards conclusive judgement without a conviction from a competent court, so we won’t be left standing when judgement sits.
–
While social media may be invaluable in the dissemination of information, it possesses the inherent danger of creating tainted perceptions that become our reality! ~FRZ
–
#DaddyFreeze #MarkObisesan #FreeTheSheeple” 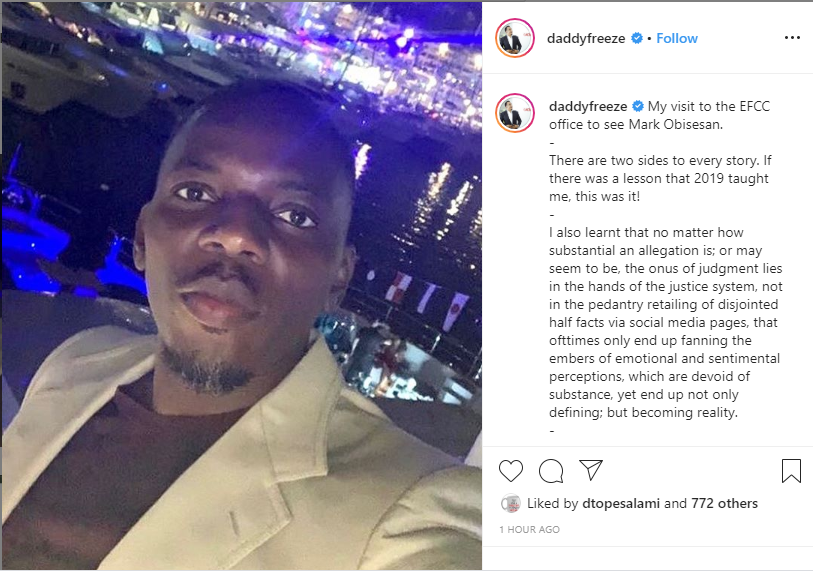