Mahmud Nuhu Ribadu, the son of the pioneer chairman of the Economic and Financial Crimes Commission(EFCC), Nuhu Ribadu, married his fiance,  Amina Aliyu Ismaila, at the Al-Nur Mosque in Federal capital territory, Abuja.

As expected, the wedding fathia which held on Saturday, was graced by the who’s who of the Nigerian political scene, business moguls, northern elites, friends and well wishers.

Among those present at the event were Vice President Yemi Osinbajo, former vice president Atiku Abubakar, former Ogun State governor Ibikule Amosun, among many other dignitaries.

See some photos below 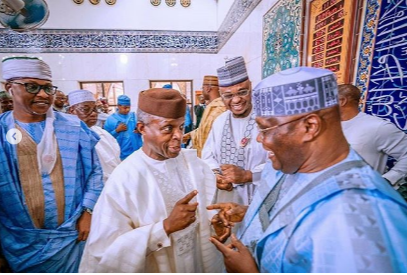 Itire community in Mushin was thrown into mourning as a man, Cisse reportedly died after jumping into a well to pick up his phone...
Read more
- Advertisement -