Controversial Nollywood actor, Uche Maduagwu has tipped DJ Cuppy to become the first Nigerian Disc Jockey to get a nomination at the Grammy awards.

The controversial actor made the comment after Nigerian singer, Burna Boy lost his Grammy nomination to singer Kidjo.

“Angelique Kidjo’s Grammy is a victory for women in Africa, @cuppymusic will become the first Nigerian dj to get a Grammy nomination… ✈️✈️Its a wishful thinking hoping for another #African singer to #beat someone that already has 3 #Grammy award, a four decade of dominance as a successful African singer globally, and 13 #albums to her credit, 🙄this #beninese singer deserve to win the #best world #music category at the 62nd Grammy award in #America. ✈️Honestly, i think this should be a #motivation to other Nigerian female singers to rise up and take the music industry with their creativity, female singers in Africa should stop allowing male singers intimidate them, 👿music has no gender, talent and creativity is everything. #Cuppy will become the first #dj in #Naija to get a grammy nomination, haters are free to write this prophecy down.” 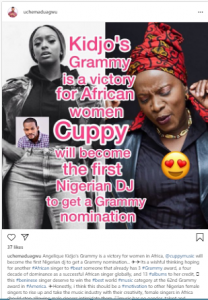