Home Metro News Even Though I Spent My New Year And Birthday In Detention, I...
Facebook
Twitter
WhatsApp

Former lawmaker, Dino Melaye has expressed gratitude to God as he turns plus one on Tuesday, 7th December.

Celebrating himself with an adorable post via his Instagram page, he shared that despite spending 2019 new year and birthday in police detention, he is thankful for his life.

He concluded by admitting that his life has not been devoid of drama or without challenges.

The controversial ex-lawmaker was recently ousted from the National Assembly by a law court that ordered a re-run in his senatorial district.

He then went on to lose to Smart Adeyemi of the All Progressive Congress. 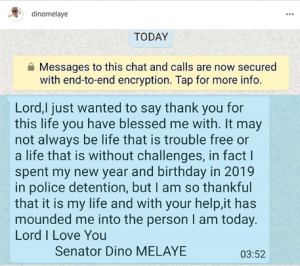