Nollywood actress, Ini Edo has taken to her Instagram page to lash out at a yet to be identified person by stating that not everyone is your friend.

The screen diva further stated that just because they hang around you and laugh with you doesn’t mean they are there for you.

She further stated that even when they say they got your back, it does not mean they won’t stab you in it.

Read Also: ‘You are destined to MARRY a Yoruba millionaire, expect a MARRIAGE proposal before December” – Prophesy Comes For Actress Ini Edo 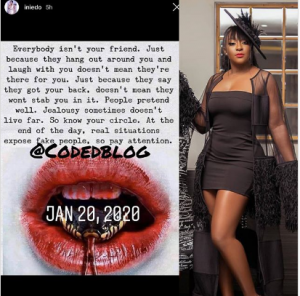