King Patrick, the CEO of Golden Boy has fired back at Peruzzi after the latter claimed that he was present at the signing with DMW.

King Patrick had claimed Peruzzi was not signed to DMW as the latter had made people believe, causing him [Peruzzi] to take to social media to release a photo of himself signing a DMW contract.

”SHUTUP @Peruzzi_VIBES With the usual lies. I rejected dat contract and walked out of Bobo (DMW lawyer) Bobo told me word for word ‘This contracts makes your contract with Peruzzi Void’. Show you my signature on the contract! And I will show you your signature on My contract..” 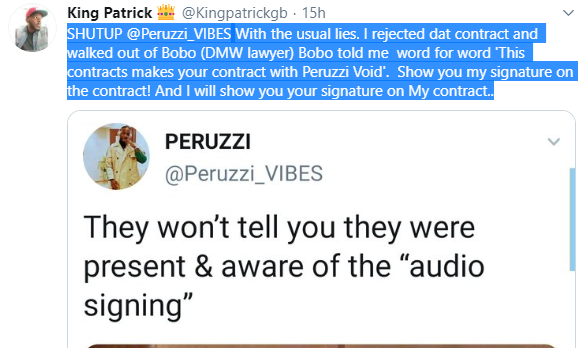