Akuapem Poloo, twerker who became a household name after she and American rapper, Cardi B twerked on the same stage during her visit to Ghana has revealed that she had wanted to become a medical doctor but her dreams were shattered when she became pregnant at 25.

Read Also: Outrage As Cardi B Sets To Pick A Tribe After Applying For Nigerian Citizenship

She made this known during an Interview on Joy Fm.

“I went to Adonten Senior High School, and I wanted to be a medical doctor. Life became someway and I was 25 years when I got pregnant with my first baby. Here am I, acting and selling for a living.” Akuapem Poloo went on to say: “I wanted to be popular badly. I’m a poor girl and I wanted to be heard. I approached a blogger to write about me too. 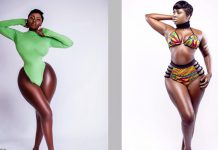