Nollywood actress, Halima Abubakar has advised her fans to ignore people who ignore them adding that it is not pride.

Speaking via her official Instagram page on Sunday, 19th January, the screen diva further advised her fans to stay away from them and flourish.

Read Also: [PHOTOS]: Actress, Halima Abubakar Breaks Down As Ruggedman Organizes A Birthday Bash For Her

She concluded by describing the act as a ‘low energy’ one which is also a complex issue.

Ignore people who ignore you.It is a complex issue.A low energy☄️Stay away from them and flourish ❤️❤️ It is not pride 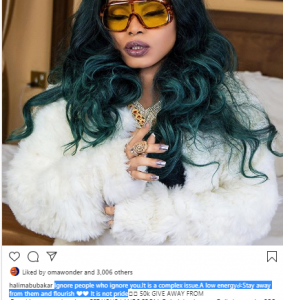