Nigerians have taken to social media to drag comedian Mr Jollof after he released a now-deleted video slamming Kobe Bryant for his lifestyle.

According to the comedian, Kobe Bryant’s lifestyle killed him.

Read Also: Mr Jollof Claps Back At Those Attacking Him Over Comment On Kobe Bryant’s Death

Nigerians have now taken to social media to drag the comedian with some wishing him death.

”Mr Jollof is just ignorant and unexposed. Claims Kobe and Leicester city owner both bought what killed them – their lifestyle killed them. I wonder how he gets to Lagos from Delta state. He made that video inside a car too.”

”If Mr Jollof dies from a car accident, no one should feel bad. His lifestyle of driving killed him. Why didn’t he just walk?”

”That Mr Jollof felt the need to use someone’s death, a family’s pain as lesson of the day on the same day a life was lost is one of the most insensitive/wicked move by any human.” 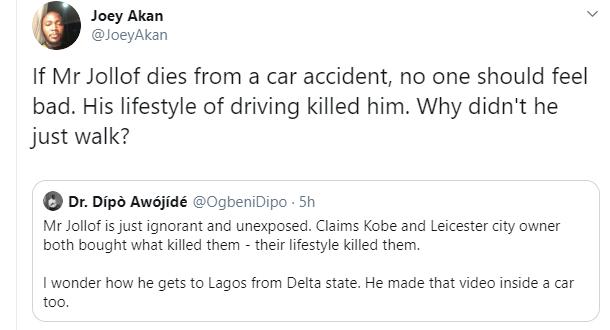