Home Entertainment Olamide Is The Only Singer That Help People Without Making Noise About...
Facebook
Twitter
WhatsApp

Nollywood actor, Uche Maduagwu has described popular rapper, Olamide Adedeji as the only singer that help people financially without making noise about it on social merdia.

He made the comment following the revelation that the singer was the only one that donated to the medical expenses of legendary singer, Majek Fashek.

This was contained in a post he sent out on his official Instagram page on Wednesday, 22nd January.

“86% of top singers in Nigeria do audio help while the rest only do it for #camera… 🤣🤣Olamide is the only singer that help people without making noise about it on #instagram and #twitter, I don’t want to mention names of all the audio helpers in the #entertainment industry because most of them are my #friends but as the only popular #actor in #Nigeria that has ever gotten @chrissyteigen attention in #Hollywood people expect the truth from me, 🙄a very great #music legend from #naija was sick in #London but only #Olamide helped while other singers were busy spending millions on gold and #diamond chains in #America and #Lagos, 💎how can you say you are fighting for the people when you can not even help legends who fought for us with their music in the past?” 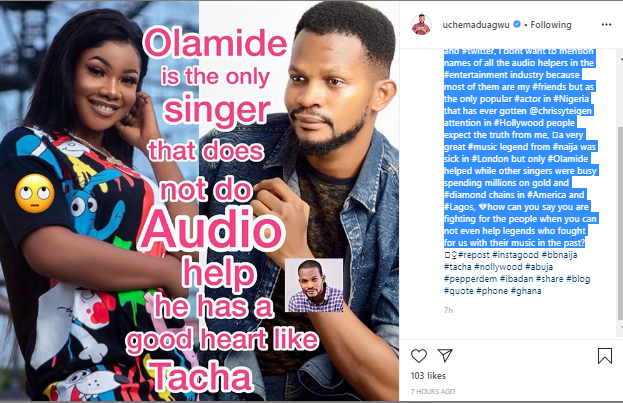