Home Entertainment Outrage As Naira Marley Brings Up Mompha To Perform With Him On...
Facebook
Twitter
WhatsApp

A new video has emerged on social capturing the moment controversial singer Afeez Fashola who is better known as Naira Marley brought up popular Instagram big boy, Mompha to perform with him on stage during a recent concert.

The now-viral video has sparked reactions from Nigerians who have stated that they would prefer operatives of the Economic and Financial Crime Commission(EFCC) to also arrest them because they would also love to become famous like the controversial duo. 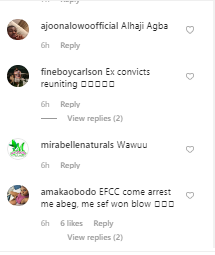