We reported earlier that singer Davido threw a subtle jab at King Patrick, Peruzzi’s former boss by asking him to seek help if he is so depressed.

Well, Patrick has fired back at him. replying to the DMW boss, Patrick alleged that the singer is only feeling stupid by popping babies and giving ladies STDS.

The duo have been at loggerhead over Peruzzi.

See his reaction below: 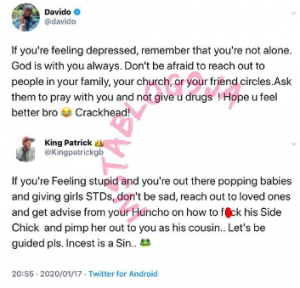