Pope Francis has tendered an apology for slapping off a woman’s arm after she tried to pull him close.

On Tuesday, the New Year’s eve, the Pope was making his way through the crowd at St. Peter’s Square, greeting well-wishers when a woman from the crowd grabbed his hand and pulled him to herself.

The pope, who appeared angry, immediately slapped off the woman’s hand and walked away.

Pope Francis, in his New Year’s message on Wednesday, however, tendered his apology for the incident saying he has set a bad example.

“So many times we lose patience, even me, and I apologise for yesterday’s bad example,” he told his congregation who gathered for the New Year mass.

“All violence inflicted on women is a desecration of God. How often is a woman’s body sacrificed on the profane altar of advertising, profit, pornography,” he said, adding that the female body “must be freed from consumerism, it must be respected and honoured.”

“We can understand our level of humanity by the way we treat a woman’s body,” he said.

“Today even motherhood is humiliated, because the only growth that interests us is economic growth.

“There are mothers, who risk perilous journeys to desperately try to give the fruit of the womb a better future and are judged to be redundant by people whose bellies are full of things, but whose hearts are empty of love.” 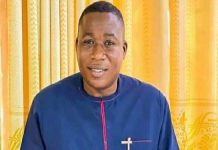