This is coming a few hours after saying Gbegiri and semo are disgusting.

Her comment has since made her fans concluded that truely the singer is pregnant and as such food tastes awkwardly in her mouth.

Read Also: Don’t Tell Me What To Do, I Have Your Type At Home; Simi Yells Back At Adekunle Gold Over Gbegiri, Semo

The singer and husband, Adekunle Gold recently had their wedding anniversary in Cape Verde exactly one year after they tied the knot in front of 300 guests. 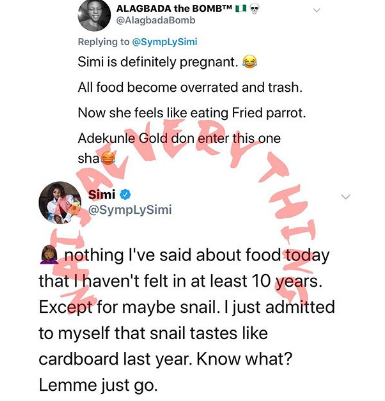