Davido’s first baby mama, Sophia Momodu has revealed that she received N40,000 from one of her social media crush simply because she didn’t have airtime.

She made this known in a  post which she sent out via her official Instagram story on Friday, 10th December.

Sophia bore Davido his child. The duo recently sparked outrage on social media after the were spotted cruising in the same private jet en route Ghana.

“This person legit sent me 40k airtime cos I said i didn’t have airtime to waste. petty.” 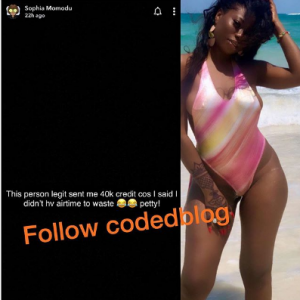