Social media users woke up to a drama between Sandra, the younger sister of Linda Ikeji, and the caterer that cooked the meal at her church wedding which held on Sunday, 5th December.

Sandra had called the caterer out over the meal which she described as ‘poorly cooked and tasteless.’

Reacting to her comment via an Instagram post, the caterer said she does not have a problem blocking her on social media adding that she did not even balance her payment.

“Dear @sandraikeji, blocking you is the least of our worries but I believe God will vindicate me. You even had a balance of 60k to complete which I let go off after u said it should be a bonus which was not part of our initial agreement. I cooked all your dishes as you requested and u even hurried me up to come to your venue as early before 12noon. When I got to your house, your mom tasted all the dishes and packed some inside your house, there was no complain whatsoever from her. My team and I sat at ur house after displaying food in the buffet till past 5pm before food was served because you started your occasion very late, because fried rice doesn’t stay that long after its been tampered with, it got sour and wasn’t served which we deeply apologized for. Every other dish was served and we carried empty coolers home.
You called me the next day to say your asheobi girls were purging and that I should give u back your money? Who does that? What will happen to the empty coolers of food I took home? How about other guests that was served? You mean I should refund u in totality because your asheobi girls said they were purging and they didn’t like the food?
Calling me out on social media because you’re famous so you’ll spoil my growing business will not shake me. I have cooked for several couples and no one has complained that all my dishes are very horrible as you have just said because I refused to refund you. Well, God is still God and he will vindicate me. Happy married life.

“Ps: everybody who has tasted our food should Pls come out and debunk this false story” 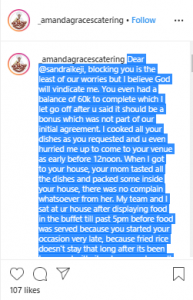