Controversial Nollywood actress, Tonto Dikeh has revealed that she won’t be sharing any photo on her social media page this January because of her sudden weight gain.

She further revealed that she took this step so as to prevent people from laughing at her.

She made this known via her official Instagram page on Thursday.

Read Also: Some People Are Investments And Some Are Bills, Know The Difference: Tonto Dikeh Advises

If the actress can be shy over a temporary weight gain, how do you think people who have been fat all their lives would feel??? Your thoughts.

The reason January will pass by without a new Instagram pishure 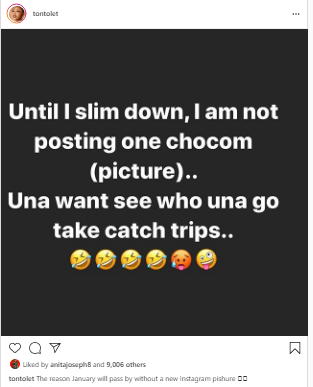