A Twitter user identified as @Sonjoe_Kutuh has shared the story of how he discovered that his girlfriend he was dating was not dating him.

According to the user, they were dating for over three years and he has been the one paying his rent in the last two years.

However, trouble started when he recently paid him a visit and he met her kissing another guy in the house. He then became angry and left.

Read Also: Lady Dumps Cheating Boyfriend After Waiting Till He Fulfilled His Promise

More drama ensued the following morning when the lady called him and asked that he call the other guy that there is nothing between the two of them. 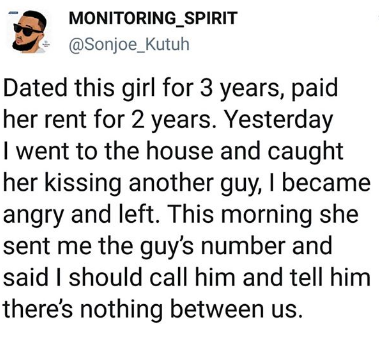