Following the ban placed on motorcycles and tricycles in some parts of Lagos State, Nollywood actor, Uche Maduagwu has written an open letter to the governor of Lagos state, Babajide Sanwo-Olu.

Maduagwu, in his letter which was made public via his official Instagram page, argued that what is needed is a regulation of the riders and not a complete ban.

“Dear Governor #BabajideSanwoOlu, we need regulation and not a ban on motorcycles and tricycles on major parts of #Lagos, that will only send a shock wave of poverty on many Lagosians… 😭😭Sir, there is no job in this #country, and because an idle mind is the devil’s workshop, so many youths took it upon themselves to be self-employed by riding #okada and Keke napep, with each motorcycle rider making a daily income of at least 3k, the Okada business allegedly generates at least 30 Billion Naira daily in #Nigeria because there are allegedly 10 million Okada riders all over Nigeria. 🙄Lagos okada riders alone should generate 10 billion Naira daily. 🤷‍♀️Imagine if these okada are banned on major roads in Lagos, imagine the poverty lagosians will face? 👿I weep when I got to know that from 2016 to 2019, there were over 10,000 accidents caused by okada riders in Lagos, but imagine if this okada #transport business was well regulated? Will these accident occur? Its only in #Naija motocycle riders have no helmet for protection, 🤷‍♂️95% of okada riders in Lagos dont understand traffic signs, so what are we saying? If you ban okada today, will criminals not look for a new means for getaway? ✈️The traffic congestion in lagos is bad, a ban on okada means more vehicles on the road which will make traffic congestion worse. Sir, during your campaign, if you told these okada riders of your alleged ban on their means of livelihood next month, will they vote? 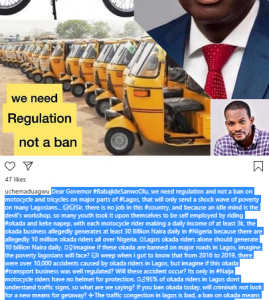