Barrister Ayo Shogunro, a popular social media commentator has lamented that contrary to popular belief that Lagos is a megacity, it is actually a suffering city.

Speaking via his official Twitter handle, he stated that he drew the conclusion because Lagos is the only state in Africa where people unwillingly leave home at 5 am or 6 am daily to get to work within the same city often for relatively low pay.

He concluded by saying he hopes the likes of Abuja and other cities in Nigeria do not end up in the same way with time. 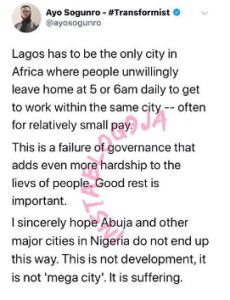