Nigerian media personality Toke Makinwa has shared her thoughts on marriage and the concept of owning one in that union.

According to Toke, she does not believe one has to be owned in marriage as this concept is very flawed.

Toke went on to say everyone should be responsible for their actions in marriage.

”I think the whole marriage concept of “owning” your partner is flawed. You do not own anyone, you are not responsible for another’s action, it should not drive you mad.”

Her post has since gotten many talking with one follower writing; ”Lol, Toke. Once you are married to someone; you both own yourselves and responsible for the other’s action. It takes someone who really understands ‘marriage’, and willing to make the best out of it, to get this.” 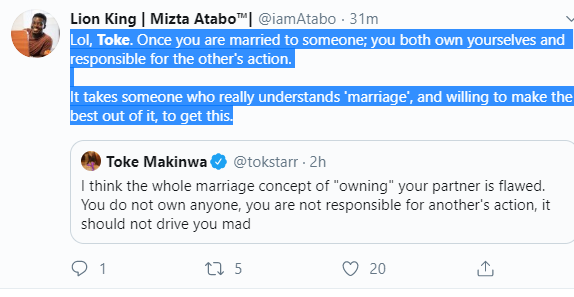