Popular Nigerian singer Folarin Falana popular known as ‘Falz the bad guy’ has been spotted hanging with legendary African footballer, Samuel Eto’o Fil in a photo he shared on his Instagram page.

The singer while sharing the photo acknowledges that it is such a rare privilege to be standing next to an absolute legend.

The Cameroonian remains the only player to have won the African footballer of the year a record of four times.

Out here with an absolute legend! Such a privilege 🙌🏾🙌🏾 @setoo9 🇨🇲 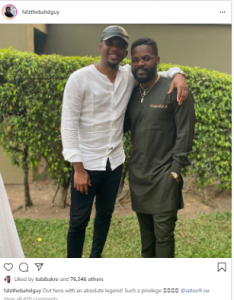