Home Entertainment I Am Not Your Regular Diva, I Speak Class: Bobrisky Brags As...
Facebook
Twitter
WhatsApp

Popular Nigerian crossdresser Idris Okuneye also known as Bobrisky has categorically stated that she is not a regular diva before going on to brag that she oozes major class.

Also, the controversial male barbie shared a new photo to back her claims wherein she was spotted wearing a nose ring.

Read Also: Valentines Day: All Housewives Should Sleep And Leave Side Chicks To Handle Their Husbands, Bobrisky Says

This is coming a few days after she stated in an Instagram post that Valentine’s day is a ‘casting’ day for people who have more than one boyfriend.

I’m not your regular diva…. I speak class 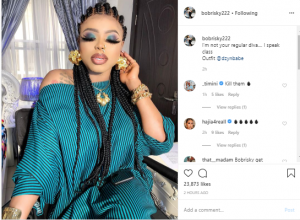