Home Entertainment If Any Chelsea Fan Is Angry At You, It’s Because They Lose...
Facebook
Twitter
WhatsApp

Nollywood actress and a proud Manchester United fan, Uche Jombo has stated that her fans shouldn’t get angry if Chelsea fans show resentment towards them.

Speaking in an Instagram post on Tuesday, the screen diva stated that Chelsea’s fans are angry because Manchester United has beaten the Blues 3 good times in the 2019/2020 season.

Read Also: Okada Ban: Why Do We Have Inconsiderate Leaders? Uche Jombo Queries

She made the comment in reaction to the two-nil defeat of Chelsea at Stamford Bridge by Manchester United on Monday.

“Live score saving lives since……🤣
That’s how I watched yesterday’s match as we are still on it #DRLOVESERIES
Good morning to everyone except paul Pogba agent.

P.S if any Chelsea fan vex for you today ….please understand we don beat them 3 times this season…their vex is justified…..them full my set 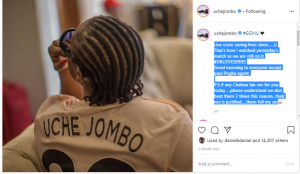