Former Big Brother Nigeria housemate, Teddy A has blown hot by stating that the opinion of anybody whose name is not God does not matter to him.

Also, he added that their approval isn’t also needed in as much as they are not God.

While it remains unknown if his statement was directed at anybody, he concluded by advising that it is important to do what makes one happy.

Read Also: Teddy A Reacts To Allegations That He Beats His Pregnant Wife, Bambam

He made this known via his official Instagram page on Saturday.

“If their name isn’t God, their opinion doesn’t matter and their approval isn’t needed. Do what makes you happy!” 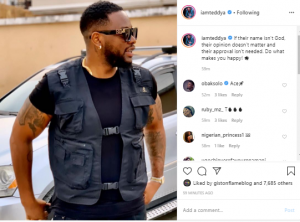