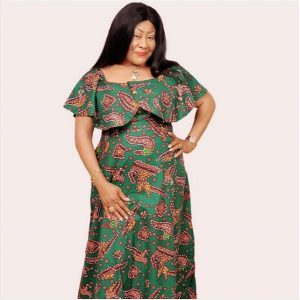 A few days ago, Nollywood veteran actress, Ngozi Ezeonu gave out her daughter’s hand in marriage at a glamorous ceremony held in Asaba, Delta State.

In an interview with Kemi Filani News, Ngozi’s ex-husband  stated that to him, his daughter, Ogechukwu Edwina Ezeonu is not married yet but only partook in a ‘Nollywood movie shoot’.

“I’m the real son of the soil in Igbo land and I am knowledgeable enough to some extent concerning Igbo marriage tradition in Anambra State. In the whole of Anambra State where I belong, a woman does not and has no legitimate right whatsoever to give out a fellow woman’s hand in marriage.

“Ogechukwu Edwina Ezeonu is yet to marry. What happened at Asaba Delta State on the 15th of February 2020 was the usual Nollywood home video film shooting. As at the time I lived with Ngozi Denis Ikpelue, I have three children; a daughter and two boys.

“Concerning my relationship with Ngozi Denis Ikpelue it is no speculations; the marriage relationship packed up a long time ago. Sometime in the year 2013.”