Media personality Daddy Freeze has taken to his IG page to drag a troll silly after the latter tried to come at him for saying marriage is not an achievement.

Freeze shared the troll’s post then went on to blast him while advising others to stop using this as a yardstick to judge a woman.

”Don’t you just love my trolls…🙄
–
Look at this one with his Pathetic Phillipe🤣🤣🤣
–
It is your watch that’s high on codeine🤣🤣🤣🤣
–
His witless response was a retort to my previous post which stated:
–
We need to re-evaluate our priorities as a people. We need to get out of our current mind space, where marriage is used as a metric to determine the achievement of an individual; especially female.
–
Our priority should be uplifting our nation and humanity as a whole, not contributing our quota to population growth.
–
The myth that marriage makes people responsible has long outlived it’s value, same applies to the statement “be fruitful and multiply” which was very valid when Adam, Eve and Noah had to replenish the earth, but has negative consequences when the world population currently stands at 7.53 billion.
~FRZ” 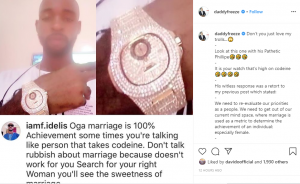