Popular Nigerian singer, Tiwa Savage is no doubt an epitome of beauty despite being few days over 40-year old.

A fan who wondered at how the singer has been able to keep herself beautiful and young despite her age then took the opportunity of a question and answer with the ’emi nado’ crooner on social media.

Replying to the fan, she said she sleeps in a gas incubator once a month before going on to state that she was just kidding.

She then thanked the fan for the compliment. 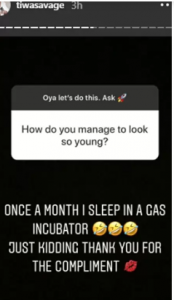