Popular social media commentator and former musician, Tunde Ednut has queried why no church has ever held prayers for low sperm count in men instead it’s all about barrenness in women.

He made this known via a post he shared on his official Instagram page on Saturday, 22nd February.

The popular social media commentator has often raised his voice on trending topics from his based in the US where he currently resides.

No church has ever held prayers for low sperm count in men, its always barren women but why 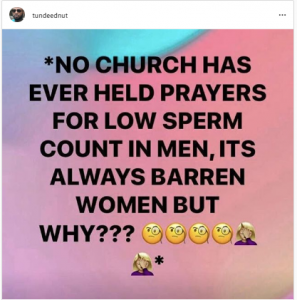