A social media user, Victor Udoh has shared the story of how two secondary school girls were caught after selling their friend to a ritualist for just N50,000.

According to Udoh, the two girls ran out of luck after they picked the same taxi that took them to where they sold their friend while returning.

The taxi driver then noticed that they were both sharing money without the third girl.

Read Also: [Video]: My husband is a ritualist; Nigerian woman cries out as she and son are rescued from the back of an SUV

This made him quietly drive them to the police station where they opened up after investigation. 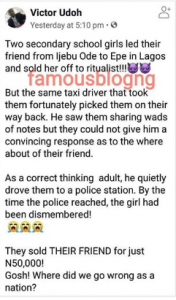