Yoruba actress, Fausat Balogun, better known as Madam Saje, has opened up on the reason she acts as the mother of younger colleague, Odunlade Adekola in movies.

Speaking in an interview with City People, Madam Saje said she and Odunlade understand each other so well.


The actress also talked about acting with her husband.

“My husband has never acted my husband in any movie at all, he often takes up the role of an elderly man. At times, if I don’t interpret my roles well, he scolds me and frowns at that. He is still my teacher,” she said. 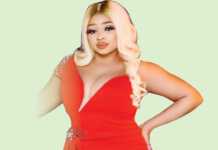