Veteran fuji singer, Wasiu Ayinde, popularly known as K1 de Ultimate aka Kwam 1, had many talking when news surfaced that he had purchased a N200million Rolls Royce Ghost Limousine.

The singer had purchased the car to celebrate his Maiyegun of Yorubaland title, it sparked controversy.

Speaking with Isaac Oguntoye, Kwam 1 reveals why he purchased it.

Read Also: Why It Took 11 Years For KWAM 1 To Be Installed As ‘Mayegun Of Yorubaland’

“If it gladdens my heart, why shouldn’t I continue to buy? Certain things come with new responsibilities. I have other brands of cars as well. At my age, if I buy a Rolls Royce, it is not out of place. Some people are younger than me who work diligently and drive expensive cars. Buying a Rolls Royce is nothing special; I just wanted to enlarge my garage with something new. “

On his romantic relationship with actresses in the Yoruba movie industry, he said ” It is not everything that is said about one that one should respond to. I am a married man with children and a role model to many. I have friends that people see me around. Should I stop making friends simply because I don’t want people to talk? I will continue to make friends.” 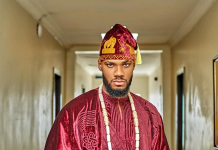 Singer Buju Under Fire Over Old Tweets About Nigerian Artists