However, the popular comedian in his prayers said: ‘Chioma, you will never know sorry when he should have said ‘sorrow.

Not minding the error, Chioma replied to him swiftly with an emoji than depicts ‘Amen.

Also, it is impossible that the comedian purposely made the mistake so as to set tongues wagging. 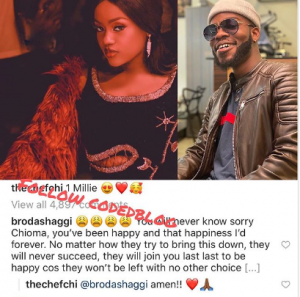