According to him, Nigerian men who diss single women need to stop as many of these men are the ones who in fact need Shiloh more.

Uncle Sola as he is fondly called stated that single men who are “broke and don’t have enough sense to attract a woman” need Shiloh more than single women.

”If you are a single man, don’t diss a woman here with Shiloh. Why are you still single? Perhaps you are broke or you don’t have enough sense to attract a woman. You need Shiloh more badly.” 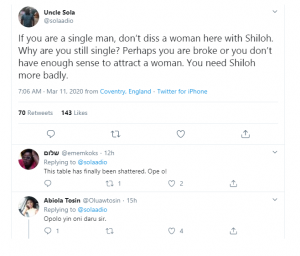