The Bundesliga has announced that all matches will be suspended until April 2 to help contain the spread of the coronavirus.

This means that no fixtures in either the Bundesliga or Bundesliga 2 will take place this weekend as earlier scheduled.

The decision follows the announcement of the English Premier League to suspend all matches until the 4th of April to curb the spread of the virus.

Recall that UEFA has also postponed all Champions League and Europa League matches scheduled to hold between 17th to 19th of March. 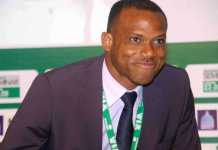