Recall back in 2017, comedian Akpororo made a joke out of Yung6ix for spending N3.9million on drinks at a night club.

The rapper, who didn’t find it funny, took to Twitter to slam the comedian with his then official DJ, Baddest DJ Timmy, dragging the heck out of Akpororo for making a joke about Yung6ix.

DJ Timmy, at that time, took to social media, alleging that the comedian’s wife was a ”sex slave” before they got married and that she had ”five abortions for a dancer known as PD”.

Taking to Instagram on Tuesday, Baddest DJ Timmy, tendered an apology to the comedian.

”I want to use this medium to tender my reserved apology to Akpororo & his family. I have always wanted to do this but I NEVER had a chance to

“I was Young, stupid & blindly loyal that is why I was fighting another man’s battle. I thought doing that was a sign of loyalty but I was just plain stupid

“Let it be on record that all through my stay in Leadcity university, I never met your wife and everything I said back then was a BIG LIE

“I hope this episode will teach others a lesson that KARMA Is real. Allow people fight their battles and stop with the Blind loyalty. I am your Big fan and will continue to be a fan. May God lift and uphold you now and forever (Amen)” 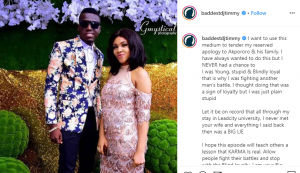