Former Nollywood actress Victoria Inyama has again taken to social media to share a lengthy piece on the effect of domestic violence on its victims.

Recall that Victoria called out Etinosa a few days ago over the latter’s refusal to apologize over her desecration of the bible but could apologize to Apostle Suleman for saying his side chicks bleach too.

Read Also: You Are A Jobless Retired Old Mother – Etinosa Fires Back At Victoria Inyama

In a new post on her page, Inyama shared her thoughts on domestic violence victims saying they sometimes suffer mental health issues.

She then went on to subtly shade Etinosa who had some months back revealed she was violated by her officer husband implying that the actress does have some mental health issues.

“Sadly most victims in trying to get their pain out self harm, use alcohol & drugs to escape d abuse or memory of d abuse.

“It’s hard being productive after Series of Abuse in marriage, worse still, being married to a service/ force officer in Nigeria.

“Then getting into an industry where coercive sex for stardom is d order of d day! That’s more abuse for d victim, so I do Empathize but constant outbursts won’t help.

“Every victim of Domestic Abuse needs to get help Asap….then focus on self rehabilitation or else there will be continuous frustrations as there will always be men ready to pay for sexual gratification from ‘celebrity’.

“So smoking with bible pages is deep Anger towards God. Daring to / getting nude & screaming ‘fuck everyone’ is being Hopless.

“There are very few talented Actresses so I understand d desperation to be notorious to get attention from zaddy’ but Zaddy do appreciate academically intelligent ladies too, cause apart from sex…what else can U offer.

“Get some Rehab plsssss….. Have a great weekend ma darlings….” 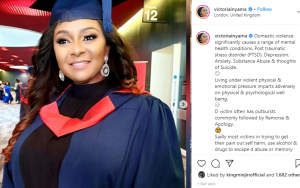