Controversial Nollywood actor, Uche Maduagwu has replied actress Kate Henshaw following her criticism over the appointment of Elisha Abbo as the patron of Actor Guild of Nigeria(AGN).

Speaking in an Instagram post on Thursday, the controversial actor stated that the lawmaker is God sent to the organisation.

Read Also: ‘We Don’t Want To Be Slapped’ – Kate Henshaw Reacts To Appointment Of Elisha Abbo As Patron Of Actors Guild

@k8henshaw Senator Elisha Abbo is God sent to AGN, and he has been destined to be our patron… 🤷‍♀️🤷‍♀️Dear #KateHenshaw, you are free to express your opinion, but as you do that, always have it at the back of your mind that majority always carry the vote, 🙄and if you ask any #actorregistered with the Actors Guild of Nigeria, 🎬they will unanimously tell you that nobody is perfect, and that one single mistake from the past should never define a man, so, having a Senator that allegedly donates 20% of his salary to the disabled in #Nigeriaas a patron is not a bad idea. 🤷‍♀️Madam, the fact that so many actresses are not coming out to criticize this Senator for being made AGN patron should tell you something, let us apply spiritual wisdom in everything we do.🤷‍♂️#repost #nollywood#instagram #actress #lagos 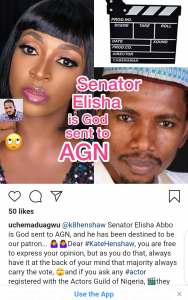