Nigerian rapper Yung6ix has replied to his former DJ, Timmy after the latter took to social media to call him out.

Timmy claimed the rapper deceived him and made him buy things he had no use for and in no time, he lost everything and almost took his won life.

Yung6ix has now replied Timmy, saying he is known to be an attention-seeking person.

The rapper added that he motivated Timmy to be more as he saw potential in him and that Timmy forced himself to be his DJ. 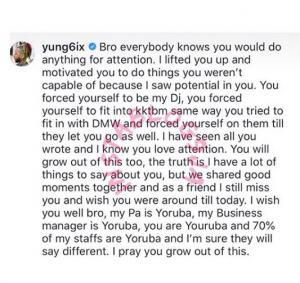