A few hours ago actress Tonto Dikeh took to social media to slam her ex-husband Olakiunle Churchill, claiming he is bisexual.

The father of two has now responded to the actress asking that she leaves him alone and focus on her career.

He went on to slam Tonto for her need to always use his name to trend on social media adding that idleness will be the reason anyone would react to all her tantrums. 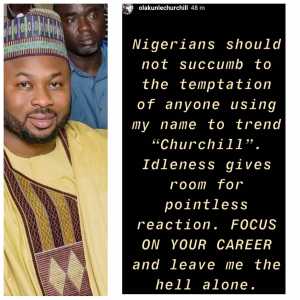 Tonto since leaving her husband has continued to drag him on social media and in interviews, at some point, claiming he is a ritualist.