Emeka Rollas, the president of the Actors Guild of Nigeria AGN, wasted no time in slamming an IG user after the latter asked a question.

Issues started after the IG user inquired when he would drop controversial Senator Elisha Abbo as a patron of the guild. Wasting no time, Emeka asked the person to go die.

Abbo has a case in court after he was caught on tape attacking a woman at a sex shop in Abuja last year.

Since the announcement of his appointment as patron of AGN, many have opposed it over the said assault case. 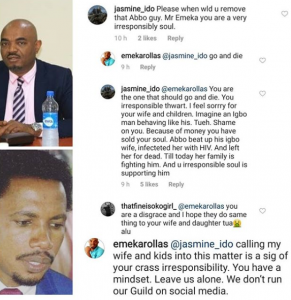