A Nigerian man by the name Amadi Ejim has taken to Facebook to share his thoughts on polygamy.

According to Ejim, men are “polygamous in nature” and God “multiplied women on earth to suit the polygamous nature of men.”

Read Also: ‘Don’t Let People Rush You Into Marriage By Telling You Your Mates Are Married – Omokri

He continued saying he can take multiple wives because “biblically, it is not a sin to marry more than one wife.”

Ejim then said he qualifies women with “pet” and “dog” that he bought with his money, adding that a dog he bought cannot bite him for playing with other dogs.

”God made all men polygamous in nature, and multiplied women to suit the polygamous nature of men.

“Now, the Western countries in a quest to reduce the population of Africa, adopted to teach their newly ideology of one man one wife in the churches, with hellfire as punishment to multiple wives and husbands.

“Biblically, it is not a sin to marry More than one wife, for..” it is better to marry than to burn”, but it is a grievous sin to marry one wife and still be sleeping with another woman/ women.

“Personally, I won’t marry a lady that can’t live with 2nd wife, because I can’t have one woman that will be carefully starving me of sex, and expect me to be faithful.

“More also, I qualify women with pet, I can’t live with a Dog I bought with my money that bit me because it saw me feeding or playing with another dog.

“A woman I spent all that exorbitant life savings on in the name of marriage shouldn’t be telling me women to meet and how to meet them, unless she is the one that paid my dowry, then she’s free to kill me…” 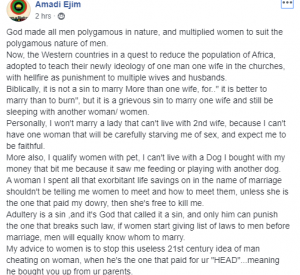