A new tweet has detailed the beef between two of Nigeria’s greatest Fuji musicians, Obesere and K1 De Ultimate.

The beef which was birthed in the 90’s and still lingers on today saw Obesere build a house like that of K1’s and used it for a poultry business.

Read Also: “I Would Have Been Richer Than Dangote, But..” — Obesere

“Obesere’s peak in Fuji music was 20 years ago.
Man was a total menace. Rose to stardom and stayed up there for years. The Fuji Clan especially Wasiu Ayinde hated him so much. Guess what Obesere did? He built an exact design of K1’s house and used it as a Poultry Lmao.

Obesere never showed respect to anyone he met in Fuji with an exception to Alh Sikiru Ayinde Barrister. He believed he was better, hotter and had money than everyone in Fuji Music at that time. For every one new car Wasiu Ayinde bought, Obesere bought two of it for farming.

He made a lot of hit songs. Gogo night, Omorapala Overthrow, Asakasa, Egungun Be Careful, Okokoriko, American Faaji, Oodua, Efissy, Obadan, Mr Teacher and many more that I can’t remember. With his naked women video vixens, he was number 1 in country and ROW in Fuji music sales

He was Muslim Clerics (Alfas, Sheiks and Imams) biggest nightmare. They cursed him at their waasi, they used him as bad a bad example and warned their members to desist from listening to his songs. Obesere being a Muslim didn’t care for once, Man was a complete ass Lmfao

Obesere is the only Fuji Musician in history who is married to one wife. Off the screen, people close to him say he is a very decent person. I mean for Obesere’s kind of person’s personality on the screens, one would think he should have at least 10 wives”. 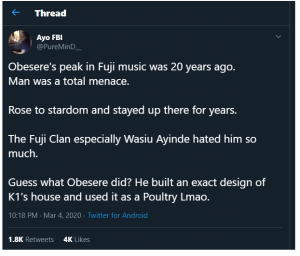