Media personality Toke Makinwa has disclosed that she has been losing friends lately.

According to Toke, this began to happen after she engaged in a tough prayer.

Makinwa, who took to her Instastories to share this information, stated that God has been exposing and revealing people to her after praying that people who are not meant to be in her life to be taken away. 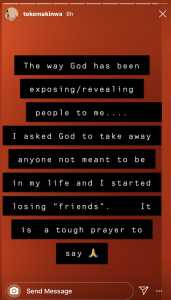 This is coming a day after the vlogger advised single women to go out more often as men will not fly into their lives.